Just over half of Americans are willing to take the Covid vaccine once it’s available, while a third of women say they will refuse to take it.

A new poll reveals apparent skepticism among many Americans to take the vaccine as the FDA seems poised to issue emergency approval this week.

About 34% of women said they are either somewhat or very unlikely to take it, perhaps due to the booming anti-vax sentiments on social media.

In all, only 55% of Americans say they are likely to take a Covid-19 vaccine if it were available today.

One participant in the poll said, ‘Vaccines need to be tested more than a few months before I would feel comfortable to get it. ‘ Another said they’d ‘like to see when others take it if there are any side effects.’

The skepticism is certain to concern public health officials and came on the day that the first recipients of the Pfizer vaccine received theirs in Britain, which approved the shot first. It needs two doses to be effective.

A new poll shows that in all, only 55% of Americans say they are likely to take a Covid-19 vaccine if it were available today 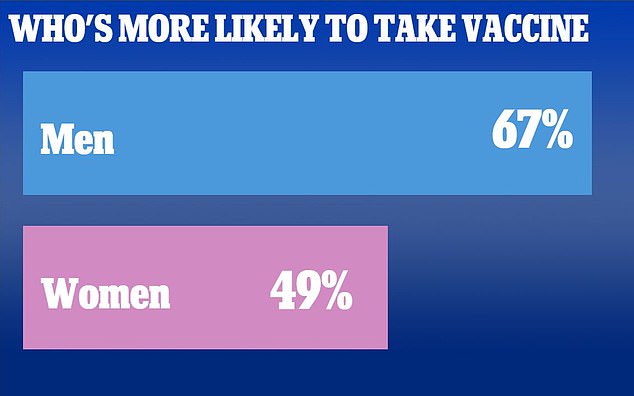 The poll shows 67% of men are likely to take the vaccine, while only 49% of women are similarly likely to get the the Covid-19 vaccine 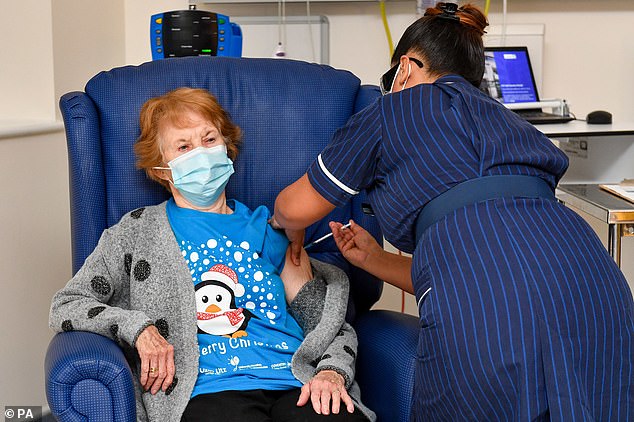 The moment Margaret Keenan, 90, became the first patient in the United Kingdom to receive the Pfizer/BioNtech covid-19 vaccine at University Hospital, Coventry, administered by nurse May Parsons, at the start of the largest ever immunization program in the UK’s history

An FDA advisory panel is scheduled to take up a request Thursday to authorize emergency use of Pfizer’s vaccine. Vaccinations could begin just days later but initial supplies will be rationed.

The shots are not expected to become widely available in the U.S. until the spring.

About 60% of participants in the poll have confidence in the CDC and FDA in rolling out a safe and effective vaccine.

On Tuesday, the NHS started the biggest vaccination drive in British history at 50 hospital sites where the UK’s Covid-19 vaccine is being rolled out to the over-80s, the vulnerable and frontline hospital and care home staff.

A 90-year-old grandmother and 81-year-old man named William Shakespeare became the first people in the world to get the approved coronavirus vaccine.

At least 5,000 people are expected to be inoculated Tuesday in England and Scotlanmd – around 100 people in each center – with 800,000 doses of the Pfizer/BioNtech vaccine already in the country.

According to the poll, about 29% of Americans say the UK’s recent approval of a vaccine has changed their opinion on it.

‘I’d be willing to take it eventually, but I would need to wait until there are positive results from it first,’ one participant said.

But just a third of Americans would describe themselves as ‘very likely’ to take it, with a further 23% somewhat likely.

Of the 1,030 adults who participated, 25% describe themselves as unlikely to take the vaccine with 17% of those ‘very unlikely’.

About 71% of Democrats would likely take a vaccine versus 52% of Republicans and 40% of independents.

‘I would be very willing to take the vaccine because this is a worldwide serious epidemic that is killing most of the human race and making us sick,’ one participant said. 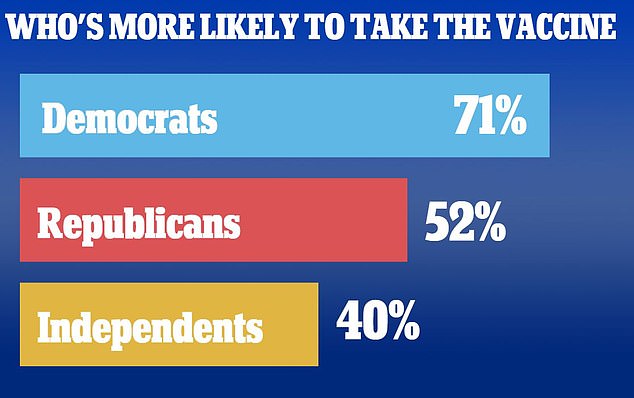 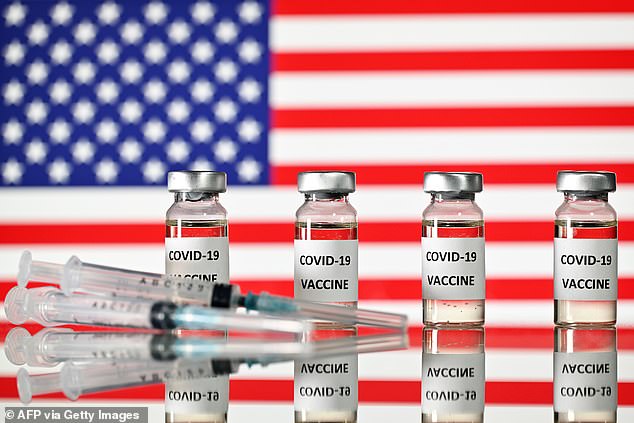 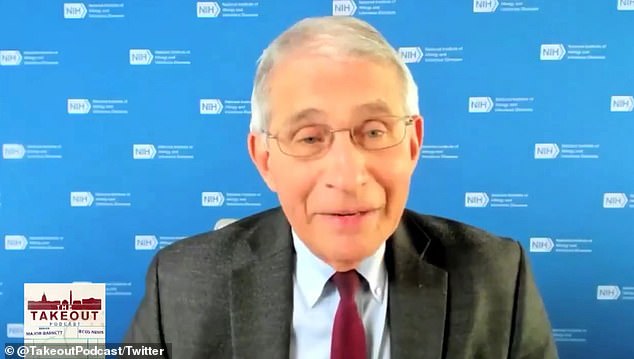 Dr. Anthony Fauci said that ordinary healthy Americans will not get their coronavirus vaccine until April. An FDA advisory panel is scheduled to take up a request Thursday to authorize emergency use of Pfizer’s vaccine. About 17% of participants would like to see Fauci take the vaccine publicly

WHO DO AMERICANS WANT TO SEE TAKE THE VACCINE?

Other members of the Trump family: 5%

Dr. Anthony Fauci confirmed that ordinary healthy Americans will not get their coronavirus vaccine until April.

A total of 11,820 people died from COVID-19 last week, according to the Institute for Health Metrics and Evaluation (IHME).

One participant said, ‘I wouldn’t take the vaccine. I don’t even take the flu shot. I just don’t trust the shot they are giving me so I just prefer to fight it off with my own immune system.’

But others had the opposite sentiment.

‘I would be willing to take the vaccine due to this pandemic being a very risky and scary situation for me and my family,’ they said.

About 44% of the group said they would be more likely to take the vaccine if they saw President-elect Joe Biden taking it publicly.

Respondents would also like to see Dr. Fauci (17%) and President Trump (13%) take the vaccine publicly.

At least 10% want to see the Pope take the vaccine in order to feel more reassured and 7% would like to see actor Tom Hanks.

Even with the vaccine, 71% of the group said they will wear face masks and coverings outside their home and 46% strongly agree with this sentiment. 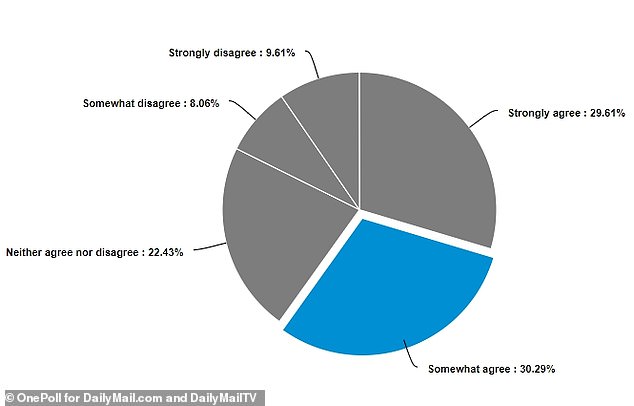 Question: To what extent do you agree or disagree with the following statement: ‘I have confidence in the CDC and FDA to make sure the vaccine is safe and effective? 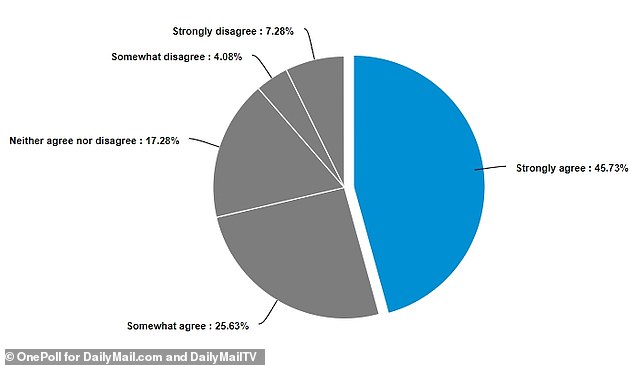 Question: To what extent do you agree or disagree with the following statement: ‘Even with a vaccine, I still plan on wearing a face mask/covering outside my home’ 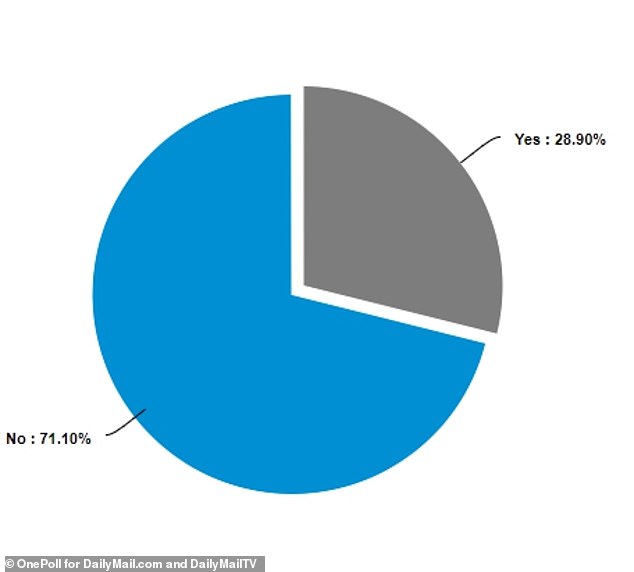 Question: Has the UK’s recent approval of the vaccine changed your opinions on it?

That willingness will at least be welcomed by public health authorities, who have warned that mask-wearing will be vital for months until vaccines have been widely distributed.

Moncef Slaoui, the head of Operation Warp Speed, said vaccines could start going to parts of the U.S. population by the end of the week.

‘I expect them to recommend approval based on the data I’m aware of and I saw the vaccine is highly effective, the vaccine is safe,’ he told CNN‘s ‘State of the Union’ Sunday.

‘It’s safety profile is compared to many other vaccines that have been in use for years indicates. The manufacturing of these vaccines is very well done. The quality of manufacturing is excellent. I frankly expect them to approve it very quickly,’ he said.