“The good news is we’ve seen highs almost near 4,000 admissions a day into our hospitals because of Covid,” California’s Health and Human Services Secretary Dr. Mark Ghaly said Tuesday. “Now we’re seeing days below 2,500 and even getting lower, which is exactly what’s going to keep our hospital conditions improving and our ICU capacity as high as it can be.”

The cautiously optimistic briefing by the HHS chief today comes 24 hours after Gov. Gavin Newsom suddenly put the kibosh on the state’s Regional Stay-at-Home Order after just more than a month and a half.

“We hope Californians don’t see yesterday’s announcement as a ‘let’s go and put our guard down,’ but let’s still firmly keep our guard up,” Ghaly said. “Let’s do what we can to make sure our rates don’t increase and rise, that although our hospital delivery system is looking better, looking like it can manage what is coming its way.” 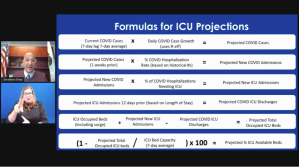 The data-heavy virtual briefing Tuesday was also punctuated by a pernicious anniversary: Today is exactly one year after the first two cases of Covid-19 were reported to California. Since then, there have been 37,500 deaths from the coronavirus in America’s most populous state.

Looking forward to where things could be by February 21 if present trends continue and walking a thin political tightrope, Ghaly also complimented Californians for increased masking and other “hard decisions” over the holidays to bend the curve. “We think that that meaningful decreased up to 25,000 hospital admissions, 5,000 ICU admissions … which not only protects our health system but translate into real lives saved across our state and frankly many of our family members who are vulnerable,” he said.

In his first media appearance on the pandemic in about 10 days, Newsom on Monday swore the decision to remove the stay-at-home order was based on science, declining cases and hospitalizations and four-week ICU projections. Presently, LA County ICU capacity is hovering near zero, far below the 15% threshold the state said was required to keep stay-at-home restrictions at bay. If the newly revised state projections are correct, ICU capacity should be around 30% by the week after Valentine’s Day.

However, with statewide Covid-19 deaths still at near-record levels right now, Newsom had to take cover from accusations that the re-opening had distinct political considerations. Attempting to retool an enlarging but stubbornly sputtering vaccine distribution program, the Democrat faces a burgeoning recall effort and an uproar from businesses large and small that have been devastated by the Golden State’s seemingly impulsive pandemic policy stances.

As an epilogue of sorts, Tuesday’s numbers revealed downward trending as support for Newsom’s decision. Most noticeably, there has been a 33% fall in the 14-day positivity rate between January 12 and today.

Additionally, ICU hospitalizations have begun to dip over the past two weeks, an overall 10.6% decrease from January 12. Adding recently appointed Government Operations Agency Secretary Yolanda Richardson to the mix, Tuesday’s briefing sought to assure Californians that the Newsom administration has a viable vaccine plan to get vaccines to citizens, with a renewed emphasis on traditionally underserved communities, in a move that mirrors the Biden administration.

In the spirit of overall hope for one of the hardest hit states in a nation battered by Covid-19, Ghaly unveiled the metrics and math the state used to justify lifting its stay-at-home order. “Today’s cases become hospital cases in about two to three weeks, ICU cases around four weeks later,” he said. “So, if we want to really determine what the impact is of our current cases numbers, our current transmission rates, our current test positivity on where we are going to be in the hospitals, we have to look about four weeks.”

On the other hand, Ghaly admitted he had “uncertainty” as recently as last week over whether the stay-at-home orders should be lifted based on the volatility of Covid numbers. He also gave up that the controversial shuttering of outdoor dining last month was based on a desire to “reduce overall movement and reduce overall mixing” and not any specific science – a sore spot for many establishments, their owners and employees. 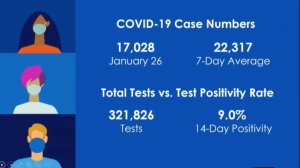 As of data released this afternoon, California had almost 3.2 million confirmed cases of Covid-19, with 17,028 new cases.

While sprawling Los Angeles County remains in a critical situation, with cases and deaths continuing to display the impact of the holiday season and haphazard safety compliance, the region’s near-omnipotent Board of Supervisors voted to dial down its own restrictions on Monday. In accordance with the state, over the coming days, the Southern California region will allow the re-introduction of outdoor dining and other private and commercial activities. Of course, as new case and death data is expected to be made available later today, this being LA and this being CA, that could all change again.

“The Super Bowl is coming up and we’ve seen what happens when people gather for a sporting event in each other’s homes,” L.A. County Board Chair Hilda Solis said of the February 7 showdown between the Kansas City Chiefs and Tom Brady’s Tampa Bay Buccaneers.