Street lamps can increase your risk of CANCER: People who live near artificial neon lights are up to 55% more likely to be diagnosed with thyroid cancer, study warns

By Ryan Morrison For Mailonline

Living in an area with high levels of outdoor artificial light can increase the chance of developing thyroid cancer – with neon lights increasing the risk by 55 per cent, study shows.

Researchers from the University of Texas Health Science Center looked for a link between people developing thyroid cancer and levels of artificial outdoor light.

They looked at data from a cohort of 464,371 participants followed for about 13 years as part of the NIH-AARP diet and health study – then analysed satellite imagery to estimate levels of light in the areas where the people involved in the study lived.

They found that those in areas with the highest level of night light pollution had a 55 per cent higher risk of developing thyroid cancer than those in low-light areas.

They believe that one reason for the link is that light at night suppresses melatonin, a modulator of oestrogen activity – which may have an anti-tumour effect. 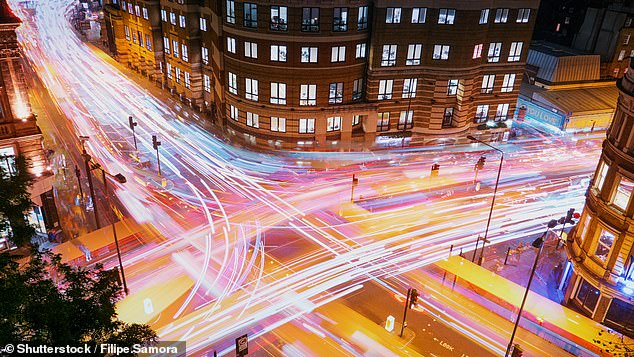 Living in an area with high levels of outdoor artificial light can increase the chance of developing thyroid cancer – with neon lights increasing the risk by 55%, study shows

LIGHT POLLUTION IS ARTIFICIAL LIGHT THAT IS EXCESSIVE, OBTRUSIVE AND WASTEFUL

Light pollution, also known as photopollution, is the presence of anthropogenic light in the night environment.

With more than nine million streetlamps and 27 million offices, factories, warehouses and homes in the UK, the quantity of light we cast into the sky is vast.

While some light escapes into space, the rest is scattered by molecules in the atmosphere making it difficult to see the stars against the night sky. What you see instead is ‘Skyglow’.

Over the past century, night scapes – particularly in cities – have changed dramatically due to the rapid growth of electric light, study authors said.

As some breast cancers could share a common link to thyroid cancer, lead author Qian Xiao and colleagues decided to hunt for an association between night light and later development of thyroid cancer.

Xiao then looked at satellite imagery of each of their homes to determine whether those living in high-light areas were more likely to develop thyroid cancer.

The team then examined state cancer registry databases to identify thyroid cancer diagnoses through 2011 and found 856 cases among the 464,371 volunteers.

‘When compared with the lowest quintile of light at night, the highest quintile was associated with a 55 percent higher risk of developing thyroid cancer,’ said Xiao.

The association appeared to be similar for different tumour sizes and across participants with different demographic characteristics and body mass index.

The researchers noted that additional studies are needed to confirm their findings.

If confirmed, it will be important to understand the mechanisms underlying the relationship between light at night and thyroid cancer, Xiao said.

The scientists noted that light at night suppresses melatonin, a modulator of oestrogen activity that may have important anti-tumour effects.

Also, light at night may lead to disruption of the body’s internal clock (or circadian rhythms), which is a risk factor for various types of cancer. 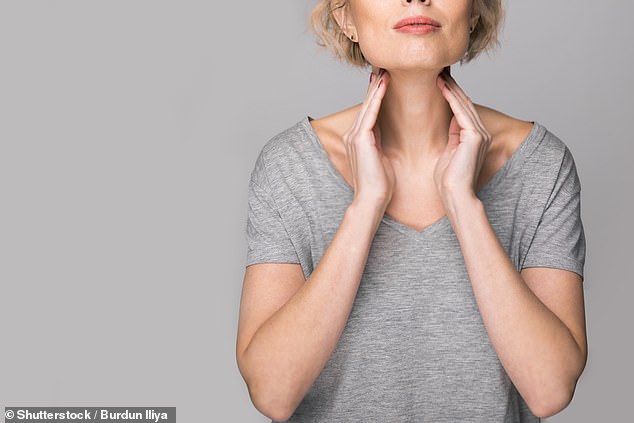 ‘As an observational study, our study is not designed to establish causality,’ said Xiao, adding ‘we don’t know if higher levels of outdoor light at night lead to an elevated risk for thyroid cancer.’

‘However, given the well-established evidence supporting a role of light exposure at night and circadian disruption, we hope our study will motivate researchers to further examine the relationship between light at night and cancer, ‘ said Dr. Xiao.

‘Recently, there have been efforts in some cities to reduce light pollution, and we believe future studies should evaluate if and to what degree such efforts impact human health.’

The findings have been published in the journal Cancer.

WHAT ARE THE SYMPTOMS OF THYROID CANCER?

The main symptom of thyroid cancer is a lump in the front of the neck. But the disease tends to develop slowly and may not cause any symptoms at first.

Thyroid cancer often causes a painless lump or swelling low down in the front of the neck.

However, neck lumps are common and are usually caused by a less serious condition, such as an enlarged thyroid. Only around 1 in every 20 is cancer. A lump is more likely to be cancer if it:

See your GP if you have a swelling or lump at the front of your neck. While it’s unlikely to be cancer, it’s important to get it checked out.

Rarely, thyroid cancer can affect the production of thyroid hormones and cause diarrhoea and flushing.