The Centers for Disease Control and Prevention announced this week that travelers from Guinea and the Democratic Republic of the Congo to the United States will be required to give contact information because of two separate Ebola outbreaks in the countries.

The relatively small number of passengers – flying into a required six designated U.S. airports best equipped to handle the situation – will have to give airlines their information starting Thursday, which will be turned over to the CDC so health officials can speak to the person if necessary and potentially have them quarantined, The Washington Post reported.

The traveler must submit their information if they have been in either African country in the last 21 days, the CDC said Tuesday.

Similar measures were taken last year when travelers from China into the U.S. were flown to specific airports to undergo temperature screenings when the coronavirus pandemic first started. 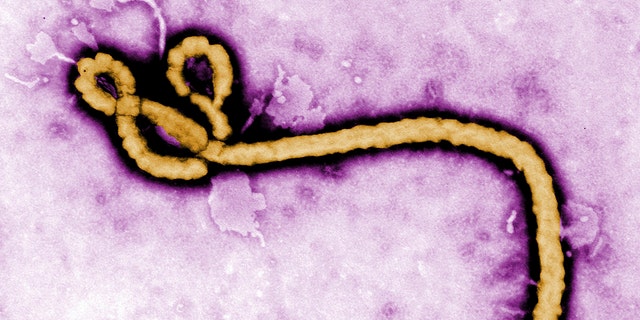 FILE – This undated colorized transmission electron micrograph file image made available by the Centers for Disease Control and Prevention (CDC) shows an Ebola virus virion. The World Health Organization said Thursday Feb. 18, 2021 that it will be sending more than 11,000 Ebola vaccinations to the West African nation of Guinea in the coming days to combat the recent epidemic of the deadly hemorrhagic fever that has been declared in the country’s southern N’Zerekore region. (Frederick Murphy/CDC via AP, File)

The virus “spreads quickly” through bodily fluids, but poses “little risk” to those who haven’t been in close contact with an infected person, according to the CDC.

It can also survive for hours to days on dry surfaces.

The CDC said the risk of Ebola spreading through the U.S. is “extremely low,” CNBC reported.

Only around 60 passengers fly to the U.S. from the DRC and Guinea each day, the Post reported.

As of Feb. 23, a total of 17 patients reportedly had the virus in both countries.