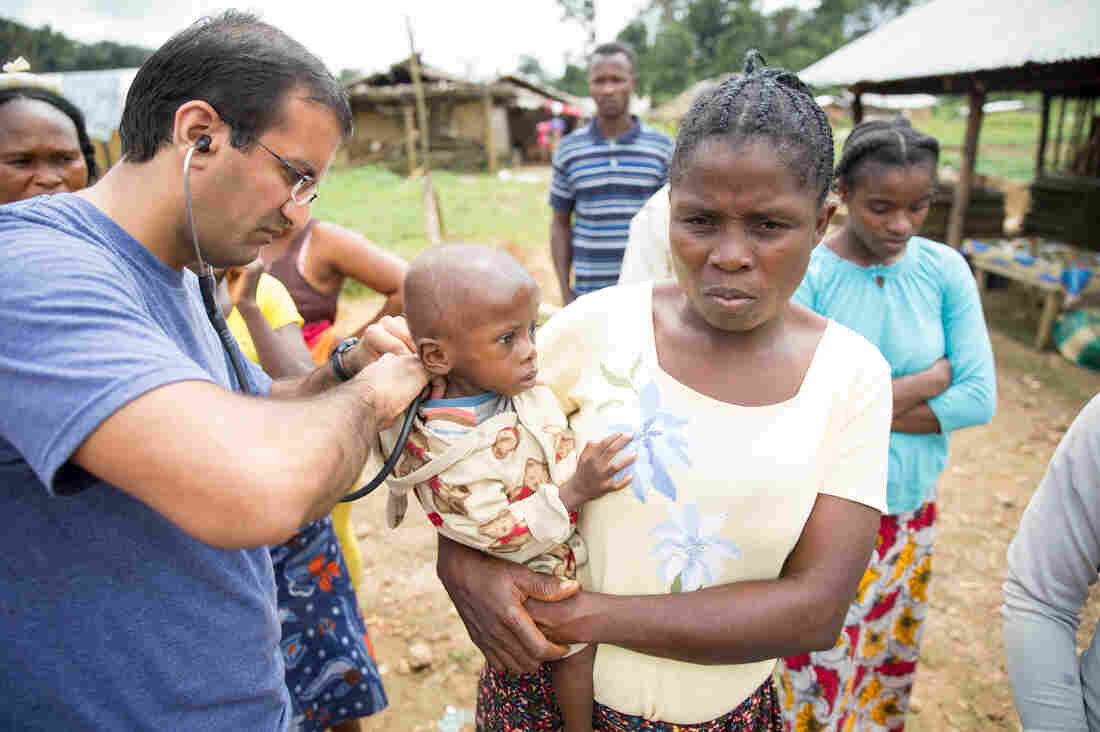 Dr. Raj Panjabi, the newly named head of the President’s Malaria Initiative, treating patients during a visit to Liberia, where he was born and lived until 1990. He’ll lead the effort to prevent and treat malaria around the world. Each year, some 400,000 people die of a disease that, he notes, is “preventable and treatable.” 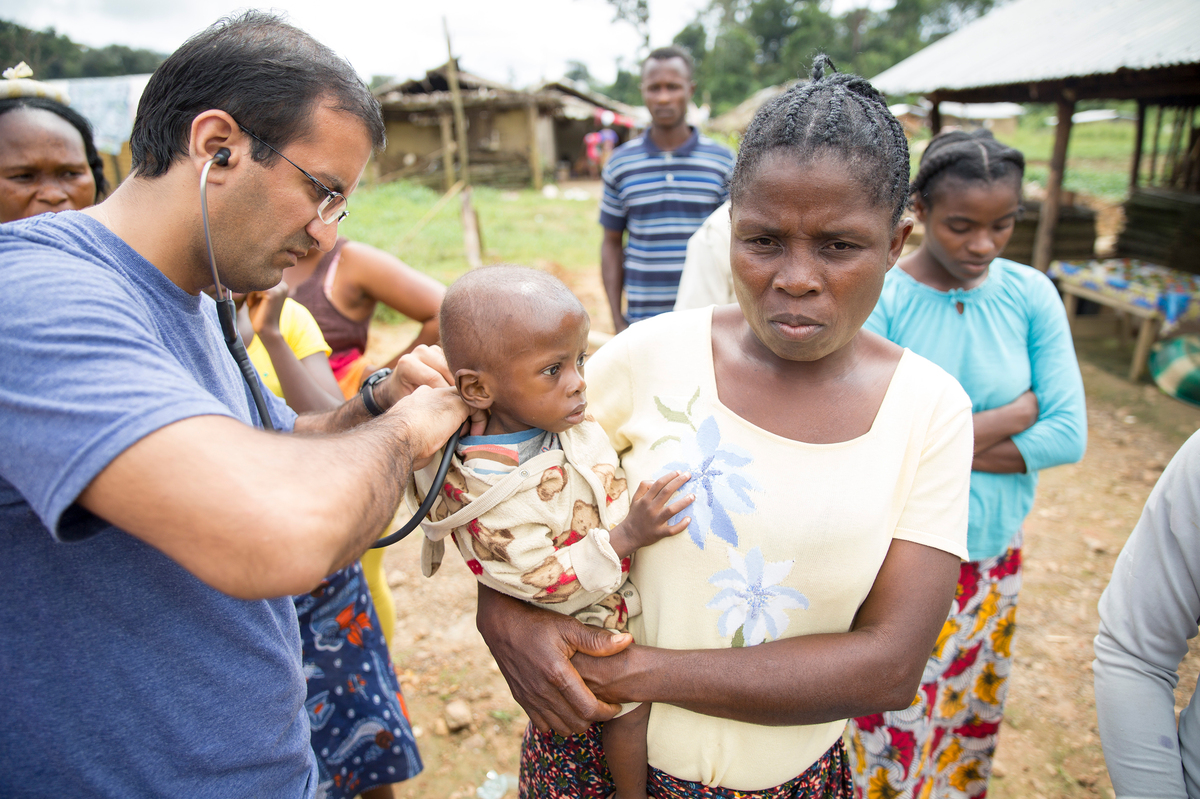 Dr. Raj Panjabi, the newly named head of the President’s Malaria Initiative, treating patients during a visit to Liberia, where he was born and lived until 1990. He’ll lead the effort to prevent and treat malaria around the world. Each year, some 400,000 people die of a disease that, he notes, is “preventable and treatable.”

Here’s a few things you probably didn’t know about malaria and the U.S.

At least eight U.S. presidents had it, including George Washington (infected in Virginia), Abraham Lincoln (infected in Illinois) and John F. Kennedy (infected in the Solomon Islands during World War II).

The current U.S. caseload is zero (with the exception of Americans who contract the disease abroad).

The U.S. actually has a malaria czar: the U.S. Global Malaria Coordinator for the President’s Malaria Initiative, overseeing an annual budget of $770 million. The goal of the initiative is to wipe out this potentially fatal disease, spread by mosquitoes, which infects some 220 million people a year.

And now there’s a new malaria coordinator. In February, President Joe Biden appointed Dr. Raj Panjabi, an instructor at Harvard Medical School and the founder of Last Mile Health, which aims to bring health care to hard-to-reach places. In 2017, he won the $1 million TED annual award given to an “exceptional individual with a creative and bold vision to solve a timely, pressing problem.”

Malaria is a disease Panjabi is all too familiar with. He had it a couple of times as a kid growing up in Liberia where his parents, Indian immigrants, had settled before fleeing civil war in 1989 and eventually coming to the U.S.

We spoke to Panjabi about his new position. The interview has been edited for clarity and length.

What made you want to take on malaria as a health challenge?

Traveling to Liberia as an American medical student, I saw the relief on the faces of parents whose children were dying from this preventable and treatable disease – and who survived after being treated by medicines and health workers supported by programs that the President’s Malaria Initiative had been building.

That’s why, when I was asked by Biden to take on this role, I couldn’t say no. I know how impactful this [U.S.] program has been.

For those of us unfamiliar with the arc of the disease, can you share your childhood memories?

The first time, I was a 13-month-old. I got it again when I was 6 years old. I don’t want to gross folks out but it’s like an intense version of the flu: vomiting, fever, diarrhea. I remember vomiting a spew on the floor of my parents’ bedroom, having to be cared for by mom for a good two to three days before the [anti-malarial] medicine started to work.

That experience for a parent and a child is the lived experience of hundreds of millions of people every day.

And malaria takes the lives of 400,000 people a year still — many of them children, the way I was when I got it.

But it’s no longer a problem in the U.S., correct?

During the civil war there were 1.3 million cases of malaria and 10,000 deaths among soldiers and civilians. Up until the early 1950s, it was still prevalent in the American South.

It’s been not only eliminated from the U.S., but in countries in Latin America and southeast Asia it’s either been eliminated or on the brink [of elimination]. [Editor’s note: This week, El Salvador announced that, with support from the U.S., it had joined the malaria-free club.]

What would it take to stop deaths and wipe out malaria in the rest of the world?

Yet it seems as if it’s easy for those in well-off countries to forget about malaria altogether.

There is a bias in global health. When a disease becomes a disease of poverty, those who are powerful may not pay as much attention. That said, it would be such a mistake to think taking our foot off the gas in responding to malaria would be a wise thing to do. As COVID has shown, diseases are able to spread fast and furious. A health threat anywhere is threat to people everywhere.

Speaking of COVID: What’s the impact of the pandemic on malaria?

Just because COVID is infecting so many people doesn’t mean the malaria disease burden has gotten any less. It’s gotten worse because COVID has disrupted health care systems dramatically and that has put the strain on health workers and clinics, disrupted supply chains as well. We need to make sure nets and malaria tests and treatments get to people.

In this age-old battle against the coronavirus pathogen, some people doubt the need to comply with preventive measures. Are there lessons from your past work in global health that would be useful for Americans to learn?

In my career in medicine and public health, I’ve had a chance to respond to several epidemics, including Ebola, HIV, malaria and COVID-19. If I’ve learned one thing about epidemics it is this: Outbreaks start and stop in communities. People trust their neighbor. People trust those who share their lived experiences. We are more likely to defeat infectious diseases when we invest in the [health workers] closest to the outbreak as not just a part but the heart of our response.

Meanwhile, some might wonder: How can we focus on malaria in the midst of a global pandemic?

You’re getting at a deeper issue: Why care about malaria when we have COVID?

I think there are really three reasons.

First, it’s the right thing to do. We have the tools to stop the suffering.

Second, it builds health systems that keep us all safer. These armies of health workers, networks of clinics and laboratories we’ve invested in to engage in the fight against malaria also help us respond to other threats. Some of these workers are the first workers to respond to COVID and Ebola and every new pathogen.

And the third reason – maybe it sounds cheesy but I think it’s existential — is a four-letter word: hope. More people have died from infectious diseases than any other phenomenon. We are engaged in a historic fight as always between human and pathogen.

We’re at this turning point with malaria, one of the deadliest and oldest pathogens. If we lost this war against malaria, I think we create despair to fight future pandemics.

Science shows we can defeat malaria in this generation. Then we create hope we can defeat future pandemics. And at an existential level, hope matters.